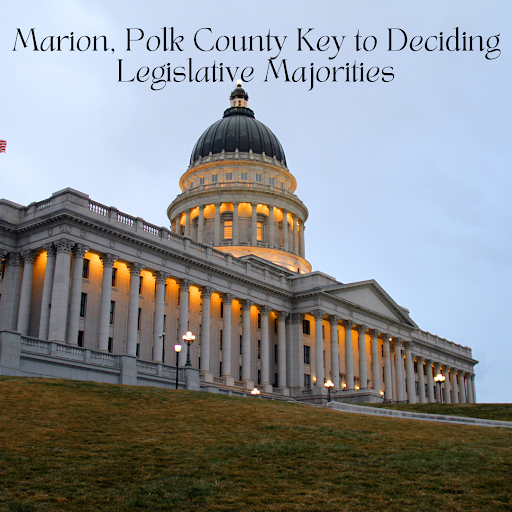 While every voter in Oregon will help decide this year’s ultra-competitive three-way race for governor, it’s voters in Marion & Polk counties, particularly in Salem, that will likely determine whether Oregon’s new chief executive will be working with Democrat or Republican majorities in the next legislative session.

Currently, Oregon is one of 14 states with a Democratic trifecta – that’s when one party controls the office of governor, the state senate, and the state house. It’s been that way in Oregon since Democrats regained sole control of the House of Representatives in the 2012 General Election after sharing power with Republicans for two years when the chamber was split evenly – 30 Democrats and 30 Republicans.

For the last decade, Democrat majorities have been able to work with Democrat governors to achieve nearly every policy goal of legislative leadership. For the last four years, Democrats in the legislature have enjoyed supermajorities in both chambers – meaning one party controls three-fifths of the chambers’ seats. All revenue raising bills must pass with a three-fifths supermajority vote, which Democrats have been able to do on their own during the last several legislative sessions.

But this year, things look a little different. This is due to several contributing factors, most notably, the redistricting process that happens once every ten years, and what appears to be a nationwide political climate that favors change. Democrats are not just defending their hold on Oregon’s governorship, but also their legislative majorities – and voters in and around the Salem area will play an outsized role in the outcome of this election because of the number of competitive districts in Marion & Polk counties. Each of these districts favor Democrats based on voter registration numbers, but it’s non-affiliated voters (NAVs) that make up a plurality of voters.

Senate District 10 comprises South Salem, West Salem, Monmouth, and Independence. Registered Democrats are 33% of voters in the district. Republicans make up 25%. The remaining 42% include NAVs, members of the Independent Party of Oregon, and members of minor parties. This race features the incumbent, Senator Deb Patterson (D) versus the challenger, Representative Raquel Moore-Green (R). Historically, this has been a Republican held seat in the senate, long represented by Salem lawmaker Jackie Winters, who passed away in office in 2019. Sen. Patterson eked out a narrow victory in a special election held in 2020 to fill the last two years of Sen. Winters’ term.

Since each of Oregon’s senate districts is made up of two corresponding house districts, both of those are competitive as well. House District 19 contains the South Salem portion of SD10, while HD20 includes West Salem, Monmouth, and Independence.  HD19 is 32% Democrat, 24% Republican, and 44% “other.” As noted above, the incumbent, Rep. Moore-Green, is running for the senate, so this house district is an open seat, featuring two familiar faces for Salem voters – both current or former Salem City Council members: Tom Andersen (D) v. TJ Sullivan (R). In the race for HD 20, which is 33% D, 26% R, and 41% O, four-term incumbent Paul Evans (D) faces challenger Dan Farrington (R).

Senate District 11 is the other highly competitive district Marion County voters will decide, comprised of HD21 (Keizer and parts of Salem) and HD22 (Woodburn, Gervais, and parts of Salem). SD 11, which is 29% D, 23% R, and 48% O, has historically been a safe seat for Democrats, partly because of district lines, but also because this is the seat of a longtime Salem icon, Senate President Peter Courtney. It’s the first time in more than 30 years that President Courtney won’t be on the ballot. He will retire as Oregon’s longest serving state legislator and president of the senate. This race features Sen. Kim Thatcher (R) v. Rich Walsh (D). Sen. Thatcher currently represents SD13, which used to contain the city of Keizer, but is now located in SD11, which is the primary reason that the new SD11 is so competitive.

Kevin Mannix (R) and Ramiro Navarro, Jr. (D) are the candidates for HD21. This district was represented by former Rep. Brian Clem for more than a decade and was not competitive prior to redistricting, but is now 29% D, 25% R, and 46% O, with the addition of Keizer. HD 22 holds the distinction of the most unaffiliated district in the state, with 52% of voters not identifying as Democrats (28% of the district) or Republicans (20%). The incumbent, Rep. Teresa Alonso Leon unsuccessfully ran for Congress this year in the new 6th district, so this state house seat is open and will feature Tracy Cramer (R) v. Anthony Medina (D).

Voters in Marion and Polk County have important decisions to make. Two senate seats: Democrats can’t lose more than two statewide and still keep their majority in the Senate. Four house seats: Republicans need to flip a total of seven statewide to split the house evenly like they did in 2012. If Democrats can win in Salem, they shouldn’t have a problem holding their majorities, possibly even their supermajorities, but if November 8 is a good night for Republicans, Oregon could be in for a big change.

Visit www.nfib.com/oregon/voting-record/ to see how Oregon lawmakers voted on small business issues during the 2021-2022 legislative sessions.