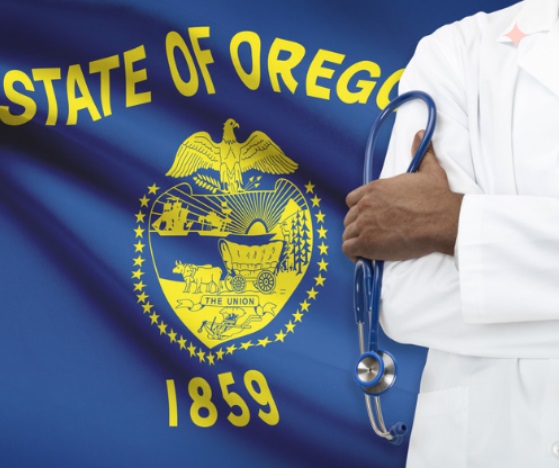 In 2019, the Oregon Legislature passed Senate Bill 770, which established a Task Force on Universal Health Care. This Task Force was charged with recommending a universal health care system that is equitable, affordable, and comprehensive, provides high-quality health care and is publicly funded, and is available to every individual residing in Oregon. The Task Force will be submitting its final proposal to the Legislature in Sept., with hopes for it to be introduced as legislation during the 2023 legislative session.

In short, SB 770 requires the Universal Health Care (UHC) Plan to be a single-payer system, which means the state would pay health care providers, like hospitals, clinics, and private practice doctors, for all the goods and services they provide to their patients. No more co-pays. No more employee or employer premiums. No more private health insurance (with a few exceptions).

The state would pick up the tab for everything – all $57 billion per year (2026 estimate) that the state, employers, and individuals would otherwise spend on health care. The Task Force’s third-party consultant, Optumas, estimates that Oregonians, collectively, would spend $58 billion on health care under the status quo, for a savings of nearly $1 billion.

You’re probably thinking, “Sounds great! I don’t have to pay anything out-of-pocket for a high-quality health care plan? And we’ll all save money? What’s the catch?”

As it turns out, it’s a truly massive catch.

The Task Force is proposing two new taxes to pay for the UHC Plan: an employer payroll tax designed to generate $12.85 billion per year and a personal income tax (in addition to the existing state personal income tax you already pay) designed to generate $8.5 billion per year, for a total of $21.35 billion in new taxes per year. This would place an unprecedented tax burden on all employers, including the smallest of small businesses, and increase middle-class income tax rates to among the highest in the nation.

To put these figures in perspective, at the close of the 2021 legislative session, the state’s net General Fund and Lottery resources were estimated to be $27.73 billion for the entire 2021-23 biennium (two-year budget).

The $21.35 billion per year in new taxes proposed by the Task Force is an unbelievably massive amount of money and an unparalleled expansion of state government. The employer payroll tax is proposed to start at 7.25% on wages up to $160,000 per year, then 10.5% thereafter. The new personal income tax starts with fairly low marginal tax rates on Oregonians making up to 400% of the federal poverty level ($54,360 for a single filer) but once a taxpayer hits that threshold, a marginal rate of 9.3% kicks in. Again, this new income tax would be in addition to the 8.75% marginal rate that most Oregonians already pay.

Even if the program were to successfully operate as intended, this tax burden is far too great and not even close to equitable – clearly picking winners and losers, as noted by the aggregate financial impacts and distributional impacts presented to the Task Force by their own consultants on May 19, 2022. Here are some notable quotes – they speak for themselves:

“Increases in employer taxation is likely to put downward pressure on wage growth or increases in the costs of goods and services, indirectly passing the UHC impact onto individuals.”

“Even with all statistics moving downward, some individuals and employers will end up paying more.”

“Self-employed individuals would have to pay both employer and individual tax – very likely to exceed existing premium costs.”

“Plans and businesses that support plans would no longer serve their current roles. Business closures and layoffs for all employees in this sector would be anticipated.”

“Employers that did not previously provide insurance benefits will under a payroll tax. This adds new costs for small businesses; small businesses will subsidize large businesses. This could have significant and lasting economic effects.”