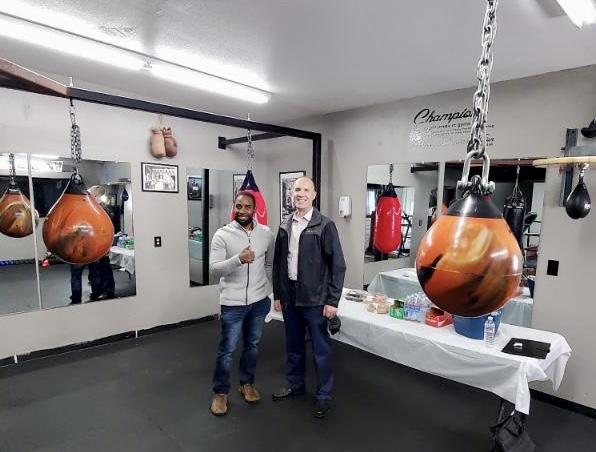 For as long as he can remember, Quandray “Q” Robertson was always skilled with his hands.

As a youngster, he began boxing at an early age and eventually sustained a 17-year professional career in the ring. Although he never fought any massive title fights, he held his own against some of the sports’ best until he eventually retired due to injuries.

Boxing wasn’t the only skill Q had as he also had been cutting people’s hair since he was 17 and eventually decided to create his own space to do so. After the family moved to the Salem area, Q’s Barbershop opened up shop in 2005.

“It was something that I had talked about with some family and finally made the decision to open up the shop,” Q said. “This community needed a barbershop, a home away.”

The move ended up working out, and he eventually bought the building and surrounding land where they’re currently located.

In 2015, Q and a business partner opened up Wildcat Boxing to spread the knowledge of the sport. The business started small over at the Kroc Center, and after a few years, they moved to Church Street Boxing.

Q was splitting his time between the barbershop and the boxing club. “The sport of boxing has truly been good to me in that it’s kept me healthy,” Q said. “I fought pro for 17 years, and I never made a great deal of money, but I was able to build relationship ships and develop a craft to give back.”

Things seemed to be going well at Church Street, but the worldwide pandemic reared its head. They had to put the entire year on hold, and eventually, Church Street Boxing was forced to close up shop.

Wildcat Boxing needed a new home, and Q decided to merge his two businesses at his currently owned property. The barbershop is in the front of the building, and the boxing gym is located in the back.

Fast forward to today, and Robertson has outgrown the space and is hoping to fully remodel the area and add a barbershop, a barber school, housing, and a new and improved boxing facility.

“It’s been going strong ever since. We’ve outgrown the space that we’re in right now,” Q said. “The goal is new construction so we can expand on that as well as putting a barber school and some residential housing in the building.”

“We’re looking at four units on the top floor, the entire second school a barber school, a barbershop on the first floor along with a cafe and boxing gym on the backside.”

This ambitious project didn’t come out of the blue as Q has been working on securing the funding and ironing out the details for the last four years.

The biggest challenge has been locating the funding for the project.

“I have some good pieces in place, and It’ll be on the same site,” Q said. “We have some preliminary drawings and have met with the city. Whether it be financial or just some direction or contacts, that is what the club really needs right now to get this to the next stage.”

The boxing gym has seen the most significant growth over the years as they are affiliated with USA Boxing and allow boxers to make it to the Olympics potentially. “There’s so much opportunity in the sport and I want to offer that to folks in the community,” Q said.

While he works on securing funding, Q will continue running the barbershop and Wildcat Boxing north of downtown Salem. Q is also welcoming of anyone that wants to do boxing training, get a haircut, or meet over coffee in the spirit of making our community a better place.