Salem Is the 9th Most Dependent Midsize U.S. Metro on Small Businesses 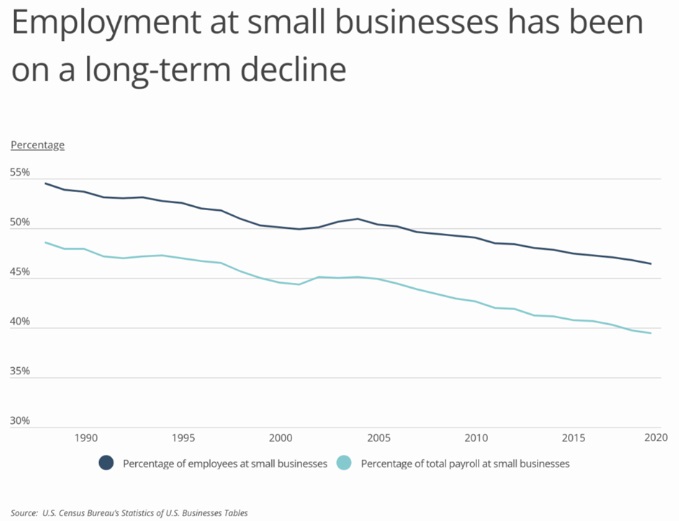 Salem Is the 9th Most Dependent Midsize U.S. Metro on Small Businesses

But the past two years have been treacherous for many small businesses. The initial shock of the COVID-19 pandemic disrupted many businesses, leading 43% to close at least temporarily and producing 9.1 million job losses in the first two quarters of 2020. Government support like the Paycheck Protection Program allowed businesses to weather the crisis, but challenges remain. Labor market tightness over the last year has made it difficult to recruit and retain talent and driven wages upward. Supply chain issues and inflation have made it harder to obtain materials and manage costs. And with interest rates on the rise and investors becoming more cautious amid fears of a recession, capital to start or grow a business is likely to be harder to come by in the months and years ahead.

While recent conditions have been uniquely challenging for small business, the role of small business in the economy has been on a decline for several decades. In the late 1980s, small businesses—defined here as those employing between one and 499 workers—employed 54.5% of working Americans and were responsible for 48.6% of payrolls. Today those figures are 46.4% and 39.4%, even though the overall percentage of firms defined as a small business has held steady over the same span.

One reason for this decline is the growing concentration of larger firms over time.

Small businesses’ role in the economy can also vary by location. Perhaps unsurprisingly, most of the states with the highest dependence on small businesses for employment are among the least populous. The leading states are rural, sparsely populated locations in the central U.S., like Montana, Wyoming, and South Dakota, and in New England, like Vermont and Maine.

At the metro level, other factors could explain a city’s dependence on small business. Some top cities, like Austin and San Francisco, have strong startup ecosystems that encourage small business development. Others are Rust Belt locations like Buffalo

and Grand Rapids, where major industrial presences of old have ceased or reduced operations and left more room for small businesses to flourish. And some leaders, including Los Angeles

and Miami, have high populations of racial or ethnic minorities and immigrants, two groups that are more likely to start small businesses.

Here is a summary of the data for the Salem, OR metro area:

For reference, here are the statistics for the entire United States:

For more information, a detailed methodology, and complete results, you can find the original report on Smartest Dollar’s website: https://smartestdollar.com/research/cities-most-dependent-on-small-businesses-2022