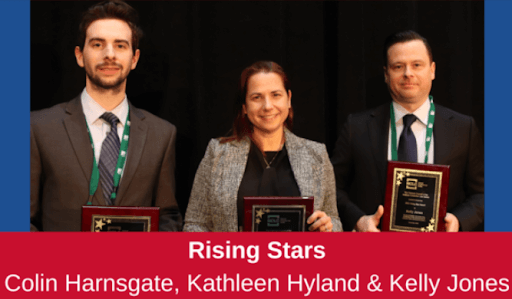 Oregon solo practitioner Kelly Jones has helped obtain millions of dollars in relief for injured Oregonians in federal and state court, in both individual and class action litigation. The central focus of his practice has been on consumer protection, civil rights, and class action litigation, representing Oregonians who have been injured by the unlawful conduct of banks, debt collectors, landlords, retailers, and employers.

NCLC recognized three attorneys who have been in practice for 15 years or fewer but have made significant contributions to the field of consumer law with its Rising Star award:

Kathleen Hyland, assistant attorney general in the Maryland Office of the Attorney General; and

Karen Meyers, a consumer protection lawyer for more than 40 years who served as director of the Consumer Protection Division of the New Mexico Office of the Attorney General, received the law center’s Vern Countryman award.

The awards were presented at the National Consumer Law Center’s 30th Annual Consumer Rights Litigation Conference, in Seattle, on Nov. 12. Speaking at the awards ceremony was U.S. Rep. Pramila Jayapal (Wash.). She praised the work of consumer lawyers to achieve economic justice for low-income people and to advance a fair and equitable society for everyone.

Since 1969, the nonprofit National Consumer Law Center has worked for consumer justice and economic security for low-income and other disadvantaged people in the United States through its expertise in policy analysis and advocacy, publications, litigation, expert witness services, and training.

The Consumer Rights Litigation Conference is the largest and most comprehensive educational conference for consumer attorneys in the nation.

The Vern Countryman Award is presented each year to a legal services or another public interest attorney whose special contributions to the practice of consumer law have strengthened and affirmed the rights of low-income Americans. Since the first award was presented in 1990, it has become the preeminent honor for consumer attorneys.