Local Business is Blowing Up! 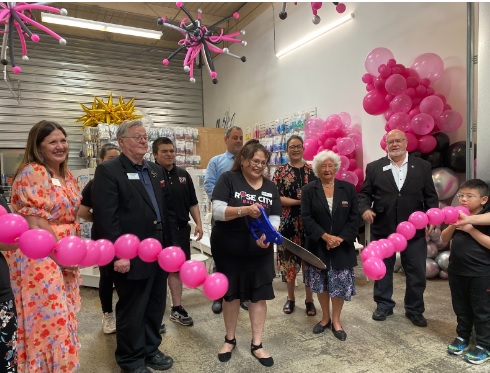 SALEM- Rose City Balloons started as a passion and turned into a business for entrepreneur Betsy Vega.

Technically, her creativity and business began in 2007 when she began decorating her kids’ birthdays. Her son wanted a Spongebob theme for his seventh birthday and so her passion was born.

At the time, Vega had a full-time job at a cancer center in Las Vegas and only did decorating on the side, but that didn’t stop people from wanting her to decorate for them.

“After that, friends and family wanted me to decorate for them,” Vega said. “Then the church reached out. There were no boundaries, I always said yes.”

Vega and her family moved to Oregon in 2011 and she began working for the state in the Department of Human Services in Hillsboro. While there, she began decorating the cubicles of her friends.

She would also create balloon centerpieces that impressed her coworkers. Eventually, someone told her that she could make money doing this because she was so talented.

“I registered my business in 2015 and continued doing it as a side gig since I had long hours working for the state,” Vega said. “In 2017, it started really picking up and I decided to resign from my job at the state and focus on the business full-time.”

During the pandemic, her business began taking off. Amazon contracted her to decorate their break room to help boost employee morale. She created a Godzilla theme that took over 70 hours to complete with her team.

“We built the frame and then covered it with balloons,” Vega said. “Every single bubble had to be precisely placed so you could see how the structure was decorated.”

People began requesting balloon deliveries with messages, so the demand was there.

Vega also began using a product that was 100 percent biodegradable. The company also sent her material from Italy, so she began making masks from their brand. They ended up donating 700 masks to children in foster care.

Rose City Balloons officially opened up their store at 45th Parallel in December of 2020 and recently moved into a bigger suite in 2022, growing from 300 square feet to 1,000 square feet.

“People really liked that they’re able to decorate and have a nice product while using a sustainable product,” Vega said. “The product comes from a rubber tree and biodegrades as quickly as a maple tree.”

Although Rose City Balloons is based out of Salem, they have helped decorate for people and businesses in Mexico, Arizona, and Florida. They also offer bilingual services.

Vega has also twice finished second at a worldwide balloon decorating festival in Las Vegas as an assistant decorator. Eventually, she’d hopes to take her team and win the competition. Someday she’d also like to open franchises around the world.

For more information on Rose City Balloons, visit rosecityballoons.com or find them on Facebook or Instagram under the same name.