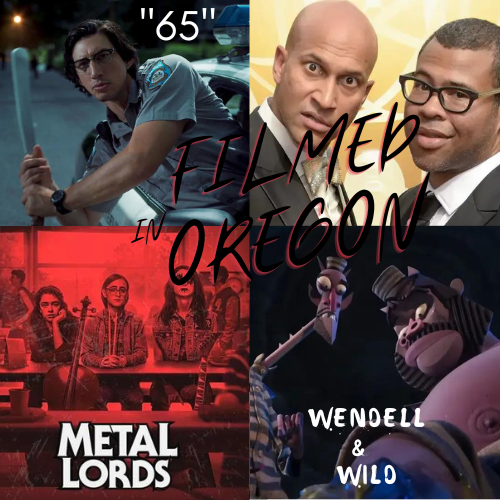 “The Rehearsal” is an HBO comedy series where Nathan Fielder lets ordinary people “rehearse” for life’s biggest moments in simulations he designs with help from actors and a construction crew.

Wildwood, a film directed by Travis Knight of Laika Studio, is based on a novel by Portland musician Colin Meloy called The Decemberists, which was adapted for film by Chris Butler. The story focuses on Prue McKeel who enters an enchanted wonderland beyond Portland’s city limits.

Wendell & Wild is a stop-motion animated horror comedy film for Netflix by director Jordan Peele, which focuses on two titular demon brothers and features the voices of Peele and his comedy partner Keegan-Michael Key.

Showing Up, directed by Kelly Reichardt, follows Oregon sculptor Lizzy (portrayed by Michelle Williams) as she tries to navigate the daily challenges of life while retaining time for her work and sets up a gallery in her town of Portland.

Metal Lords, a Netflix movie about high school life as a teenager who doesn’t fit in, centers on a friendship developed between teens Kevin and Hunter as they try to start a metal band despite challenges from girls, bullies, and parents.

65, a science fiction thriller produced by Sam Raimi for Sony Pictures, stars Adam Driver, Ariana Greenblatt, and Chloe Coleman, and focuses on an astronaut who crashes on a mysterious planet and discovers he’s not alone. Scott Beck and Bryan Woods wrote, directed, and produced the film.

“The Birch,” a live-action horror series about a teenager who seeks the help of a monster living in the woods, is written by J. Casey Modderno, David Aslan, and Dylan Mullick and directed by John William Ross and Amy Wang.