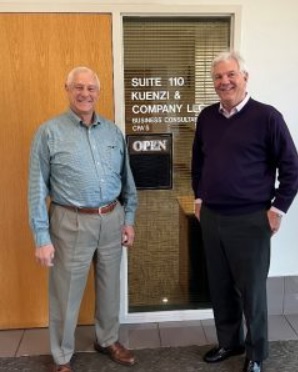 Kuenzi & Company, LLC based in Salem, Oregon, has announced it has merged with Minniti & Company, P.C., creating one of the larger accounting firms in the Mid-Willamette Valley.

The firms finalized the agreement and merged facilities in late 2021 where Kuenzi & Company (KCO) expanded its footprint at Creekside Corporate Center on Hawthorne in southeast Salem. The firms served their clients throughout the 2022 tax season while combining technology platforms and expanding their branding under the Kuenzi & Company name.

Both firms have deep roots in Salem, and both have a long history of service to their communities. KCO dates its origins back to 1978 and was founded by Terry Kuenzi, CPA who has served in a variety of volunteer roles including being Treasurer for the Salem Area Chamber of Commerce and other non-profit organizations. KCO staff also have a robust legacy of serving in key agricultural, youth, faith, and nonprofit groups. Joe Minniti, CPA, owner of Minniti & Company, P.C., has been an accountant in Salem since 1976 and started his firm in 1982. He currently serves as Chairman of the Board of Directors of Willamette Valley Bank in Salem.

When asked what attracted each other to the idea of merging, Kuenzi remarked, “after our initial meetings the first thing I noticed was that we have a very similar client base. Both firms have a lot of clients in the same specific industries. And then I noticed the similarity in the way we approach client service.” Both Minniti and Kuenzi mentioned how the two firms are also a cultural fit with one another. They care about their people, their families, and their hopes and dreams. The same can be said of their clients. “We held an informal introductory event and the Kuenzi team were incredibly welcoming to my entire staff”, Minniti said. Since then, his team has come to appreciate the unique culture within the firm they have worked hard to establish.

After the merger, KCO has more than thirty professionals with four principals in the firm. While they serve a wide variety of personal and business clients they have deep roots within the construction trades, agriculture, food processing/manufacturing, and medical industries.

“Our firm (Kuenzi & Company) has been growing”, Kuenzi said. “We needed more space here and needed to add staff….so we were going to expand our office space irrespective of Joe and his firm coming on board. Joe’s staff are good at what they do, so this event’s timing worked out well for both parties.”

The leadership team at KCO, including principals Terry Kuenzi, Aden Kuenzi, and Kyle Walter, will guide the firm moving forward. Joe Minniti plans to continue as a principal but will be adjusting his practice to focus on a smaller group of core clients while giving his former staff the room to grow within the new firm.